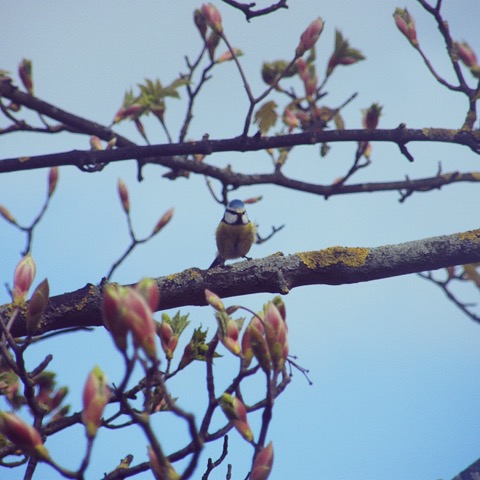 It’s been a very unusual month – from brilliant sunshine, warmth and sunbathing one week, to snow, hail and thunderstorms the next.  Of course I remember there being snow in April before and last frost dates are in May for this part of the country, but even so, as someone who generally has to walk daily from this village to the next to take my youngest daughter to nursery, I’ve been a tad miffed at snow in the last days of April (plus I never know what to put on – I leave the house in sunshine  and sunglasses and return in a torrent of sleet – and as a prescription glasses weather, I imagine I look rather odd, my sunglasses still in situ under glowering, swirling grey clouds).

As we walk to nursery, we pause along the way to notice the changes in nature that are happening all around us. Sometimes I’ll give her the camera and she’ll take some photos of her own (the dandelion and blossom), giving a child’s-eye view of the world.  She picks red and white dead nettle and we talk about the differences between them and the various stinging nettles we see growing.  We note the heart-shaped seed pods on shepherd’s purse, the differing speedwells, the celandines under the trees and she picks flowers to take into nursery to tell them what she has seen on her way.  We talk about the daffodils fading and passing, making way for the first poppies (just hatching from their hairy cases a couple of days ago) and how the blossom that is scattering across the trees will become fruit (and the anticipation of cherries to come, although there is other blossom to be seen). 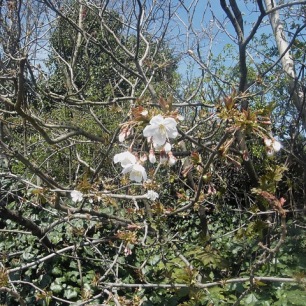 Sometimes there are particular surprises.  She always thought that ladybirds are red, but by chance we found a yellow one, its markings more merged than spots and we talked about how there are many other kinds of ladybirds and that, by chance, she will come across more, in time. 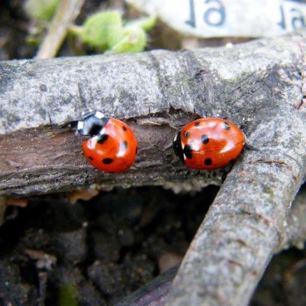 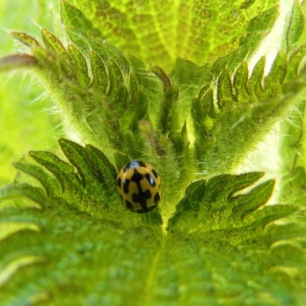 We’ve seen the first swallows of the year and even a deer, breaking from cover as we approached the bridge between the villages.  It was a little way off and I doubt bothered by us as it galloped from cover across shorter grass and towards the trees beyond.  I’d have loved to get a photo of it, but I’m just not fast enough! 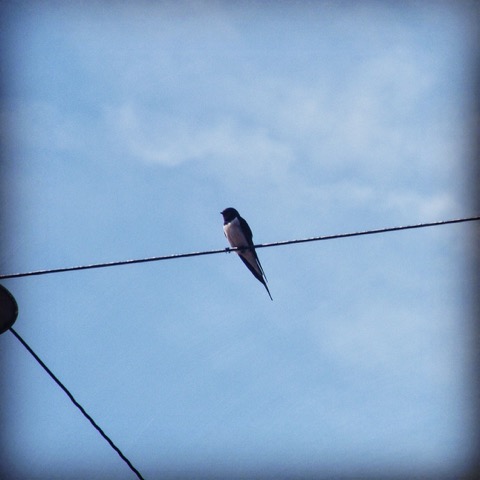 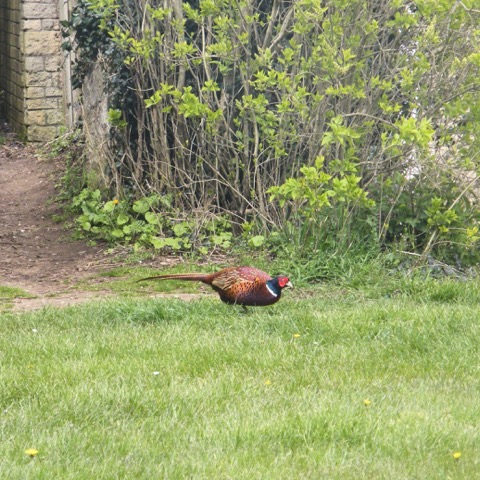 There are a lot of pheasants about – this one close by the side of the road (and the brick wall in the background is the wall of a house, its drive just out of shot to the right).  Being so close, even Arty noticed it and hung out of the side of his pushchair to get a better look. 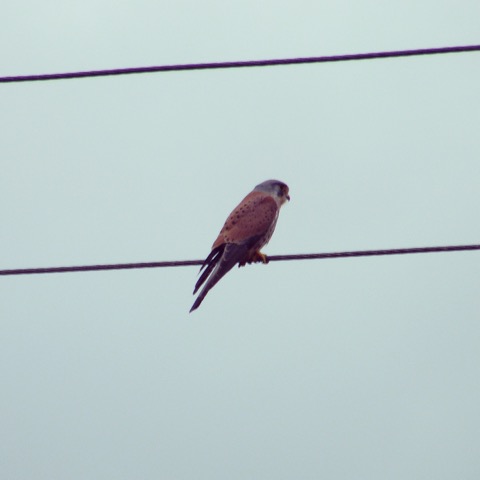 I also see a couple of regular sparrowhawks, one a frequent visitor to my garden (where it sits on the back fence or on our, currently empty, coop) and another usually sitting on the telephone lines over the fields and river between villages at the time I’m walking home from dropping Minnie off at nursery.  I often pause a little while and it generally flies off after a few moments.  I suppose it has its daily rhythm and this is a stopping off point as it patrols its territory that just happens to coincide with my usual returning time (as I will sometimes see it every day at about the same time – I guess that when I don’t see it it’s  maybe because I’m running a little later or earlier and have missed it).

There’s always so much to see on this daily walk and we always leave a little earlier to give time for us to pause along the way and investigate anything that might take our interest.  Minnie loves noticing new flowers and insects and learning their names and little Arty just loves being outside, wind in his hair, enjoying the fresh air (but always watching, watching, watching as we explore, learning that we love and value the nature that surrounds us).

Last year we took part in 30 Days Wild with The Wildlife Trusts and this year, the event will be running again in June.  Please consider getting involved and, if you don’t already, making some room for nature in your life.  You can sign up HERE. 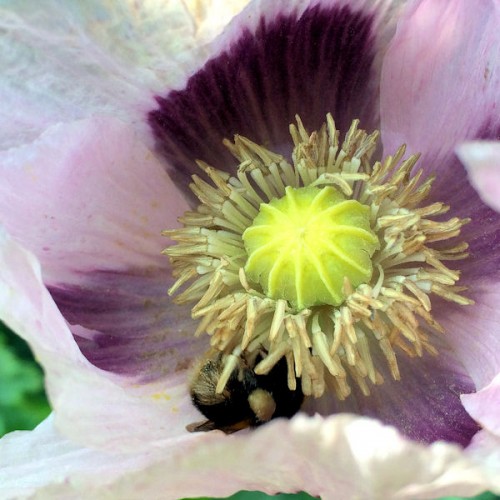 There were plenty of bees buzzing around the poppies and the raspberries are ripening on the green at the end of the road.  I imagine Moo will be keeping a close eye on them!  Not sure on the flower on the right, think it may be fumitory. 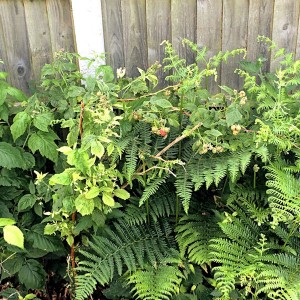 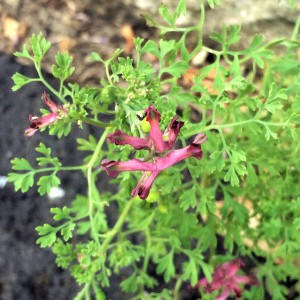 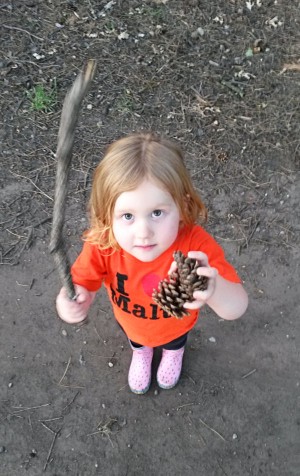 Minnie with her choice of stick and cones for the day. 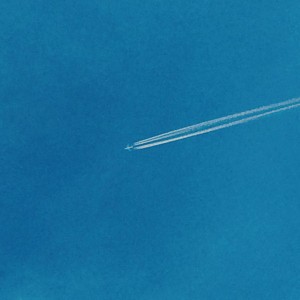 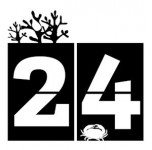 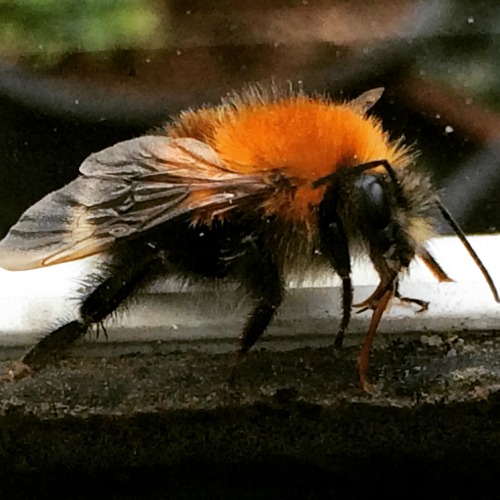 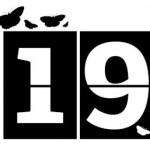 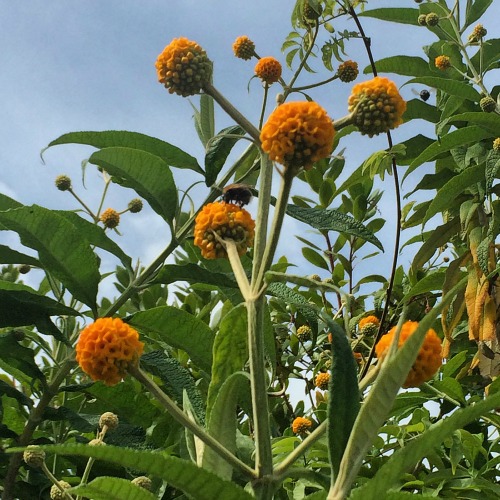 The bees love this bush – I even managed to catch one in flight (top right).  Unfortunately I have no idea what sort of bush it is (or the sort of bees). 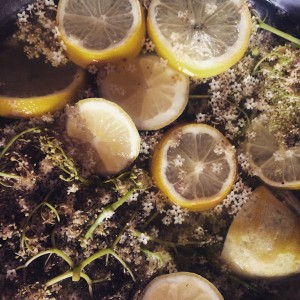 Also managed to (finally) pick some elderflower to make the first elderflower cordial of the year.  Some is used for drinking, some for sorbet and some for flavouring in other dishes.  It smells divine – a real smell of summer – I always freeze some to save to bring out in the depths of winter to remind myself of the promise of summer to come. 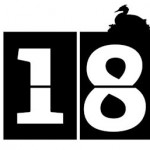 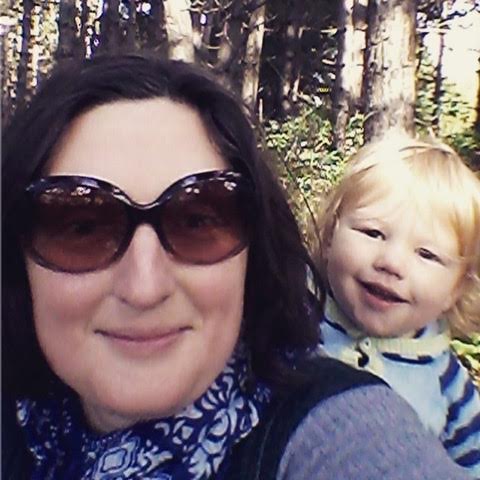 I'm Nikki, lover of herbs, chickens, being in the garden and making things from what I grow there.

My love of plants and their healing properties led me to become a Wellbeing Advisor and I offer advice and demonstrations on the wonderful range of products from Weleda.

I have various seeds and plants offered or wanted. Please see their relevant pages, linked to below, thank you: